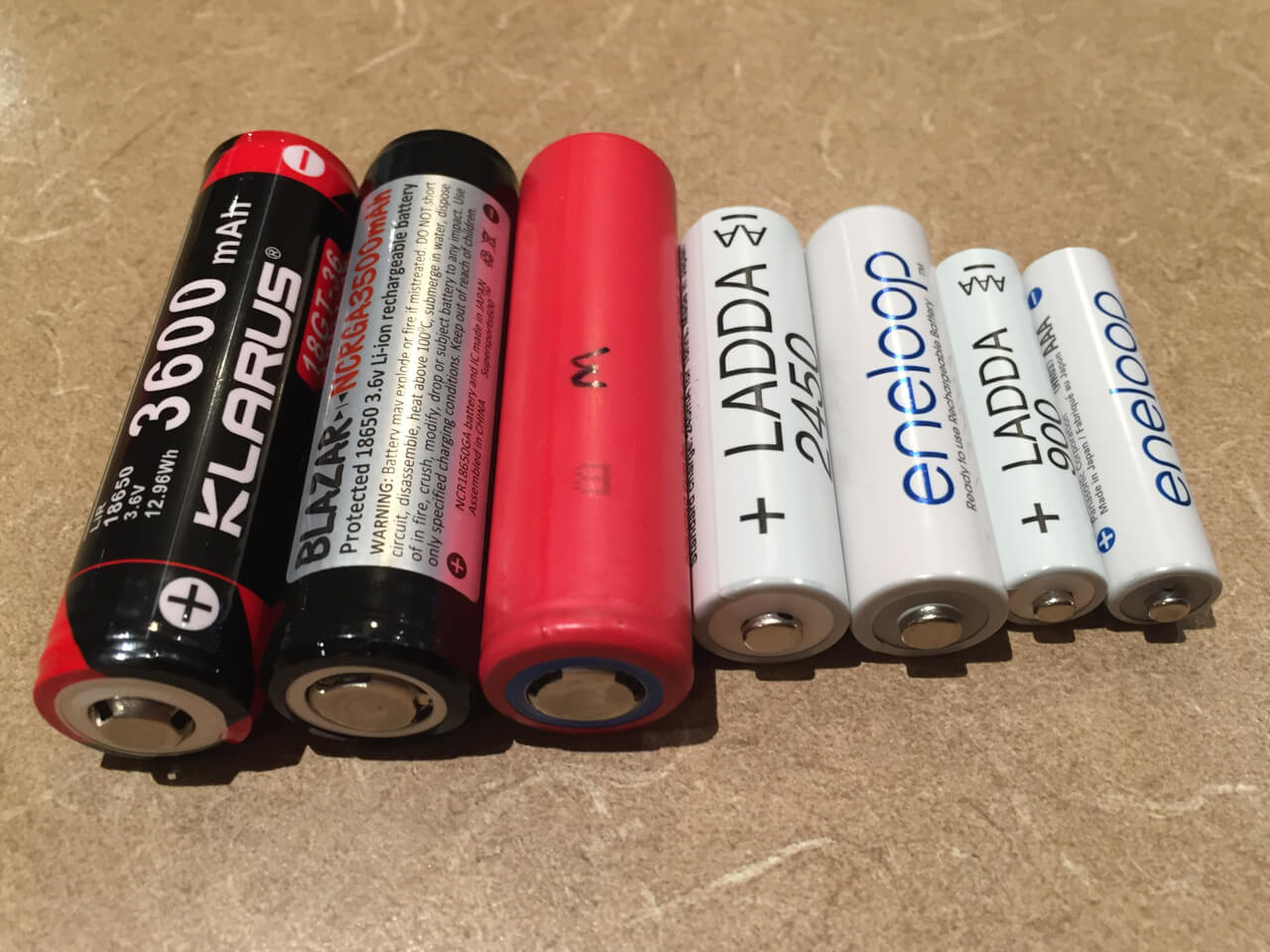 Selection of li-ion 18650 batteries, plus NiMH AA and AAA batteries.

The second of my buying guides looks at batteries, including li-ion safety. Part three will look at battery chargers.

Most light painter’s first flashlights are based on non-rechargeable Alkaline (1.5V) batteries or rechargeable NiMH (1.2V) batteries. These come in AAA, AA, C, and D sizes. Compared to li-ion batteries, these are generally very safe, and easy to purchase. Alkaline batteries are widely available almost everywhere, but as they not rechargeable, they are quite wasteful. They also loose voltage faster the NiMH batteries, resulting in a faster drop in brightness in direct drive flashlights. Alkaline batteries can also leak, especially if they are left is a discharged state for a long time, or reverse charged (caused by batteries in series at different voltages). Thus I recommend using low self discharge (LSD) NiMH batteries. The best example of these for AAA and AA size are Panasonic/Sanyo Eneloop and Eneloop Pro, or any other NiMH battery made in the FDK factory in Japan – these include Fujitsu and white Ikea Ladda batteries. Some Amazon Basics and Duracell NiMH batteries are also made by FDK (only if it is stated that they are made in Japan). Some countries in SE Asia including Australia unfortunately have Chinese made Eneloops which have been tested to be inferior to the Japanese/FDK made version. For C, D, and 9V NiMH batteries, Powerex batteries and Maha chargers are well recommended.

Avoid Heavy Duty (Lead Acid) batteries, these will only last a few minutes in a good flashlight.

As well as Alkaline and NiMH, AAA and AA batteries are also available in Lithium form (1.7V). These are non-rechargeable, but typically last twice as long as good Alkaline or NiMH batteries. They are also usually far more than twice the price of Alkaline, so value for money is not great. As they are not rechargeable, I would only really recommend them for use in extreme temperatures, in which they perform well.

Lithium CR123A (3V) batteries are non-rechargeable, and were quite popular in the earlier years of LED flashlights. However, they have largely been superseded by rechargeable li-ion batteries which are now far better in terms of current handling and capacity (more mAh = longer flashlight runtimes). The only real advantage of CR123A batteries is that they have a good shelf life and can handle large temperature ranges. If CR123 batteries in series have different voltages, this can result in reverse charging, resulting in an explosion. Thus I don’t generally recommend using CR123A batteries. Note, that RCR123 batteries (also known as 16340) are rechargeable li-ion CR123A sized batteries and have a higher nominal voltage.

Some very small “keyring” flashlights and glow sticks may use lithium button batteries. Be extremely careful with button batteries around children, as there have been many cases of permanent injury and death in children who have swallowed them.

Most of this buying guide will focus on li-ion batteries, which are pretty much essential of you want high brightness compact lights. Li-ion batteries have a very high power density, but at the expense of having more volatile chemistry. The vast majority of li-ion batteries used in flashlights have a maximum voltage of 4.2V, and a nominal voltage of 3.6/3.7V. Use of li-ion batteries requires knowledge of the safety risks required to safely use these batteries. Before discussing the types of batteries, and which are recommended, these are key safety aspects that users need to know:
– Do not charge above 4.2V as this can damage the battery with increased risk of explosion. Use chargers that have been tested to terminate charge correctly.
– Do not discharge below 2.5V as this can damage the battery with increased risk of explosion. Look for flashlights with low voltage protection, or mechanically lock out the flashlight if possible (usually by unscrewing the tail cap). If you do discharge below 2.5V, re-activating the battery should be using low current, with frequent checking that the battery does not get too hot!
– Use a Digital Multi Meter (DMM) or charger with voltage readout to test voltage before and after charge.
– For lights that use more than one li-ion battery in series or parallel, you must use matching batteries and they must always be at the same voltage before use (check using DMM or charger with voltage readout). If voltages are not the same, you risk reverse charging, and possible explosion.
– Always insert batteries with the correct polarity.
– Do not short circuit the battery, as this can cause an explosion. Note: the entire outside of the metal cylinder is -ve (apart from the +ve terminal). Carrying li-ion batteries in pockets has resulted in many an explosion!
– Do not use damaged li-ion batteries, this includes damaged wrappers.
– Only buy genuine, high quality li-ion batteries.
– Do not discharge at currents higher than the batteries tested rating.
– Do not charge at currents higher than manufacturer ratings.
– Use protected batteries (as long as they fit in a light) if you are unsure of using li-ion batteries. Batteries with added protection circuits will help prevent over charge, over discharge, or over-current. However, protection circuits are an additional point of failure.
– Avoid older ICR chemistry li-ion batteries where possible – these are more volatile than IMR, INR, and NCR chemistry batteries.
– Always periodically check on the batteries during a charge – I don’t advise charging at night or if you are out of the house.
– Charge, and store batteries and flashlights in less flammable locations – plastic battery containers are useful
– Remove batteries from flashlights if they will be out of use for a while – beware of parasitic drain!
– Keep batteries out of reach of children, and people with no common sense. 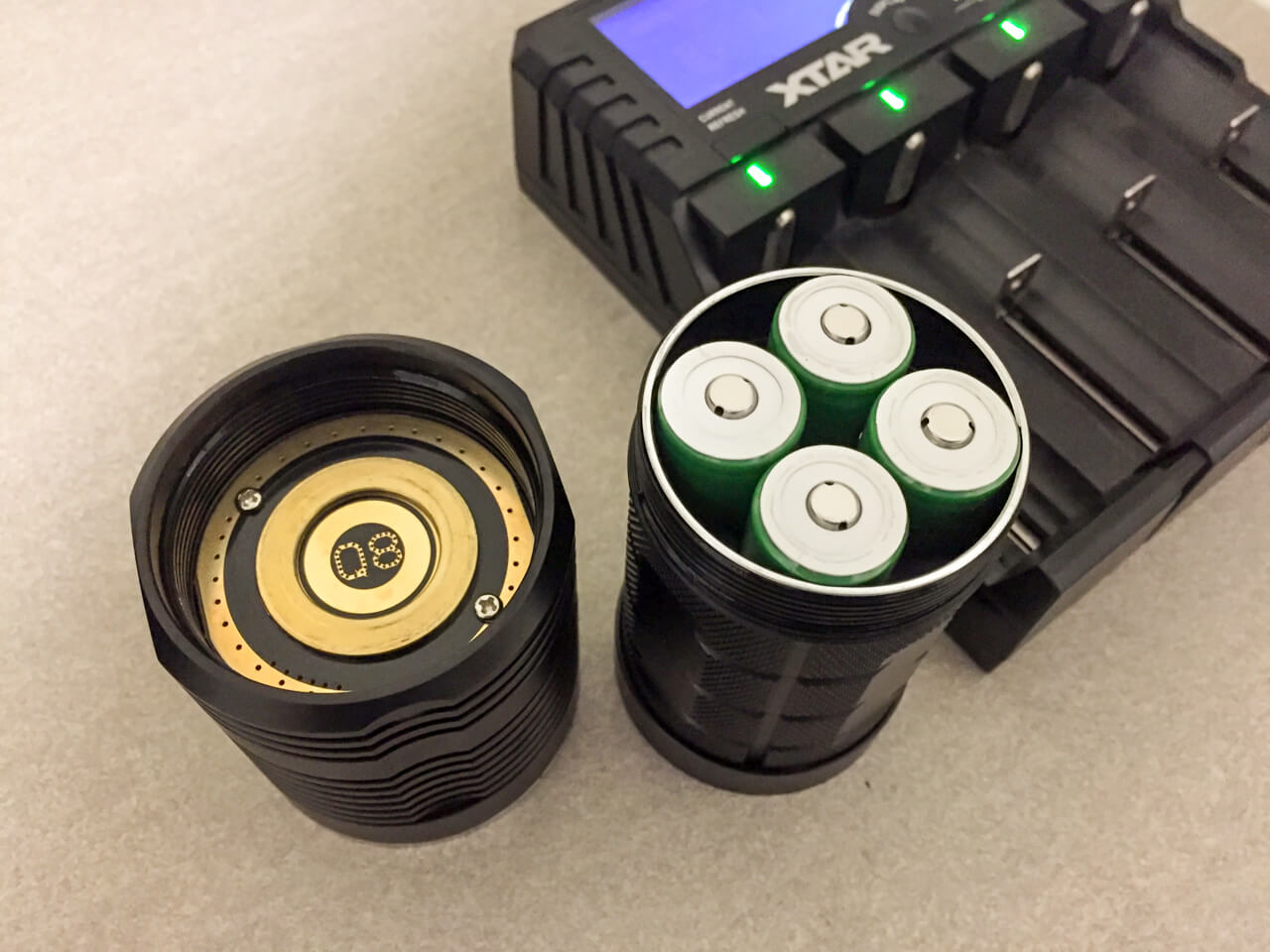 Multiple battery light must use identical batteries, charged to the same voltage

If you were unfortunate, and a li-ion battery starts to heat up rapidly (thermal runaway), quickly leave it in as safe a place as possible and keep your distance. The pressure build up during a battery vent will cause an explosion from both ends of the flashlight tube (and side if there is a side button). If there is a source if ignition, there may be flames and resulting fire. Avoid breathing in the fumes, and call the fire brigade.

Li-ion batteries have names that denote the approximate size of that battery in mm. The first two numbers of width, and the second two are length. Examples include 14500, 16340, 18350, the commonly used 18650, 26650, and more recently 20700 and 21700. Unfortunately, that is where the standardisation ends, especially when you add protection circuits onto the ends of some batteries. 18650s can vary between 18mm x 65mm in unprotected batteries, up to 18.8mm x 71mm in the largest protected batteries. Not all 18650 batteries will fit in a flashlight as they may be too short, too long, or too wide. Thus it is advised to read reviews, or follow manufacturer recommendations of battery sizes that will fit. I’ve been caught out before with batteries that didn’t fit in a flashlight!

Whilst there are plenty of li-ion battery brands, there are very few companies that actually manufacture decent li-ion batteries. The most common manufactures of 18650 batteries are Panasonic/Sanyo, Sony, Samsung, and LG. These companies make unprotected batteries. The best examples for high current (15A) applications in flashlights are the 3000mAh capacity Sony VTC6, Samsung 30Q, and LG HG2. If you want the maximum capacity of around 3500mAh but with slightly less current (8-10A), then the Panasonic/Sanyo NCR18650GA, Samsung 35E, and LG MJ1 are recommended. It is also possible to obtain most of these batteries with added button tops as well, though they are harder to find. It should be noted that Tesla use Panasonic/Sanyo and Samsung batteries.

Some companies (usually aimed at the vape market) also re-wrap these unprotected batteries with their own branding. Companies include Efest and Keeppower. Many vape battery companies overrate the maximum current (A), though this less of an issue for flashlights which typically use far less current than eCigs. As the battery that has been re-wrapped is unknown, it is often better to go with the original battery unless they are not available in your market.

All protected batteries have the protection circuit added by companies that are not the original OEM manufacturer. Most decent flashlight brands such as Klarus, Nitecore, Fenix, Olight, and Eagtac/Eagletac have protected batteries branded in their name, with the original wrapped battery usually being made by Panasonic/Sanyo, Sony, Samsung, or LG. Recommended non-flashlight brands include Keeppower (Worldwide), Orbtronic (North America), and Blazar (Australia). If in doubt go with the flashlight manufacturer’s recommended battery. Also be aware that some protection circuits allow for more current than others before over current protection kicks in. Thus some high power lights such as the Olight M7 may require batteries with protection circuits than can handle 8A. Some very high power lights such as the Emisar D4 will only allow unprotected batteries.

Sizes other than 18650, and 20700/21700 usually have batteries being made by relatively unknown Chinese companies. In these cases it is better to stick with the flashlight manufacturer’s recommendations.

Unfortunately, there are a lot of very bad and dangerous li-ion batteries around, including highly over-exaggerated current and capacity ratings. Any 18650 battery with a capacity over 3600mAh is fake or misleading. Brands to avoid include Ultrafire and GTL. In fact tests have shown some Ultrafire branded batteries to contain recycled batteries from old “end of life” laptop computers, or in some cases even a much smaller battery floating around inside. There have been many reports on flashlight forums of Ultrafire batteries exploding – please don’t be that person! 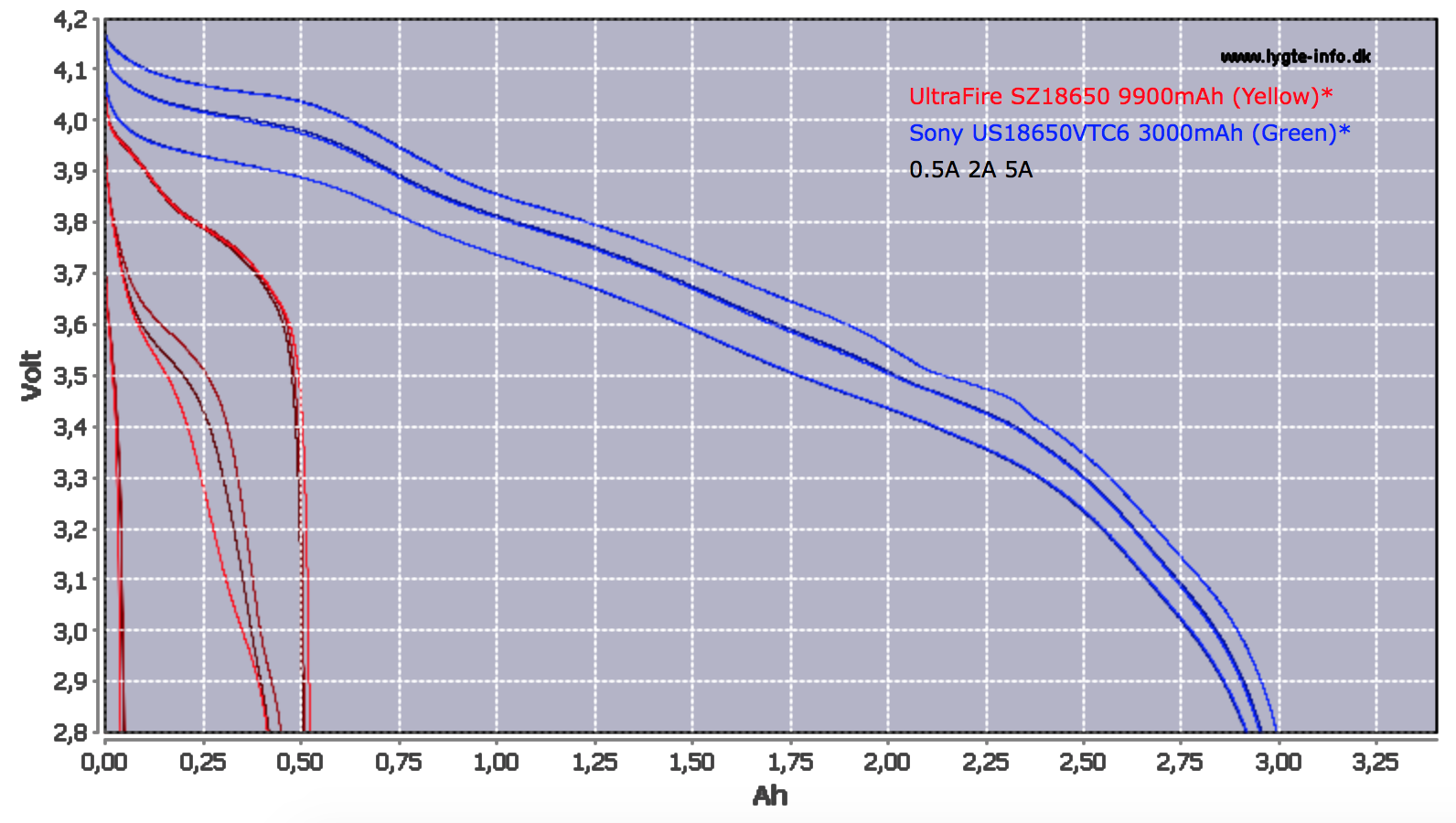 Li-ion batteries will degrade faster the further away they are from 50% capacity, or their nominal voltage (3.6-3.7V). Thus I would advise only charging them up within 24 hours of when you plan to use them (I usually charge my batteries the evening before a light painting session).  If the voltage after a session is less than 3.4V, then I will charge the battery up a little to get back to around 50% capacity.

Finally, due to safety reasons, li-ion shipping is quite problematic at the moment. Many Chinese electronics retailers such as GearBest, Banggood, and FastTech have stopped shipping to some countries. Thus it is often easier to purchase from as close to home as possible. Bricks and mortar flashlight and vape stores are good places to start, but can be expensive. Online retailers such as Supersports600 (Australia), Nkon (EU and UK), Liion Wholesale, Illumn, Orbtronic, and Mountain Electronics (USA) are highly recommended on flashlight forums.

Li-ion batteries add a lot of value to light painting art, however they must be treated with respect! 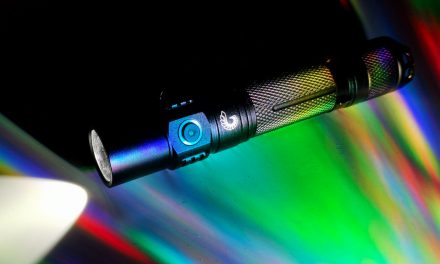 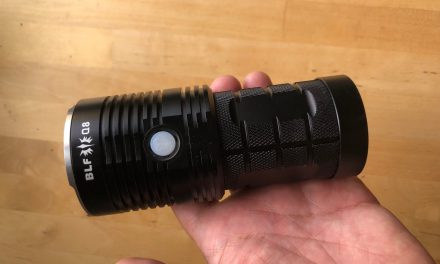 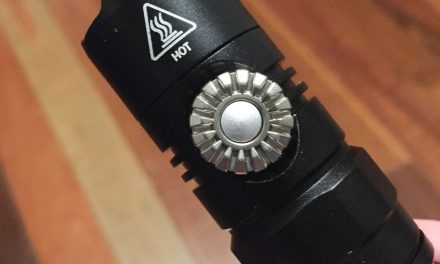 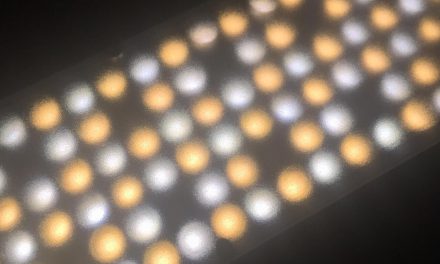