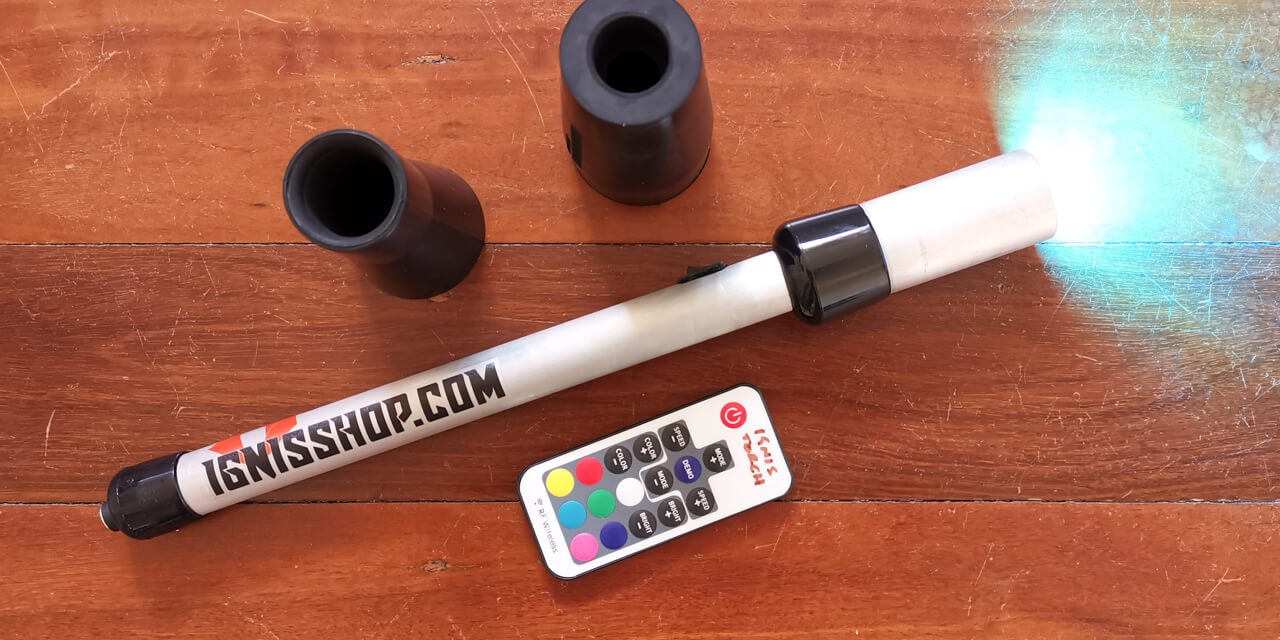 This is a review of two light painting tools from Czech Republic based Ignis Shop. The first is a RGB colour mixing torch – Color LED Torch, the second is a LED light wand – Lightsaber. Ignis Shop also make a huge range of light painting, fire, and juggling equipment including LED Sticks, Poi, Fans, and Hula Hoops. 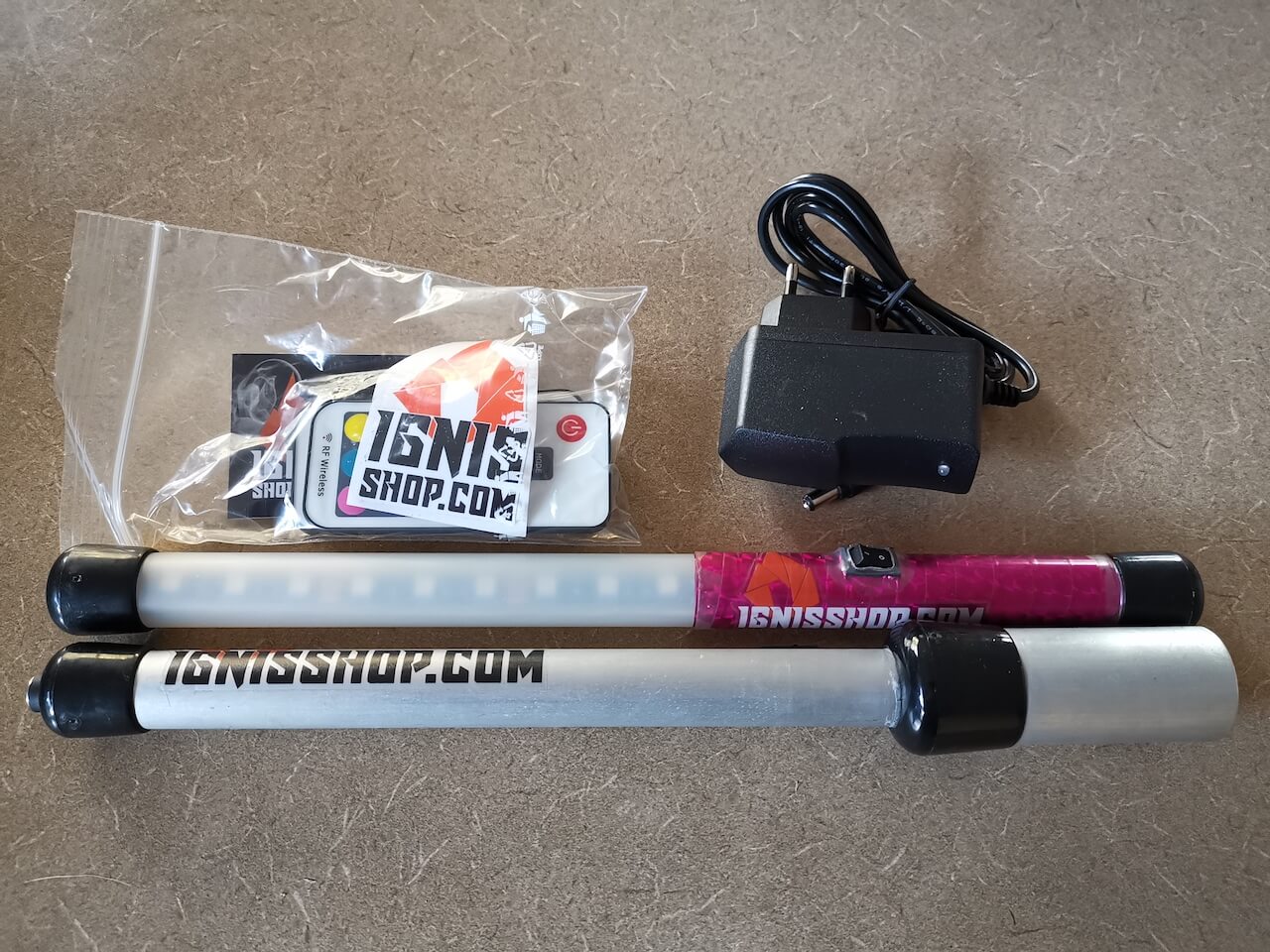 There are an increasing and improving number of options now available for RGB colour mixing flashlights suitable for light painters. The Color LED Torch is an RGB colour mixing light, made mainly from commercial off the shelf components, and placed inside a tough, and somewhat long metallic casing. It is compatible with both the Light Painting Brushes and Light Painting Paradise system connectors. 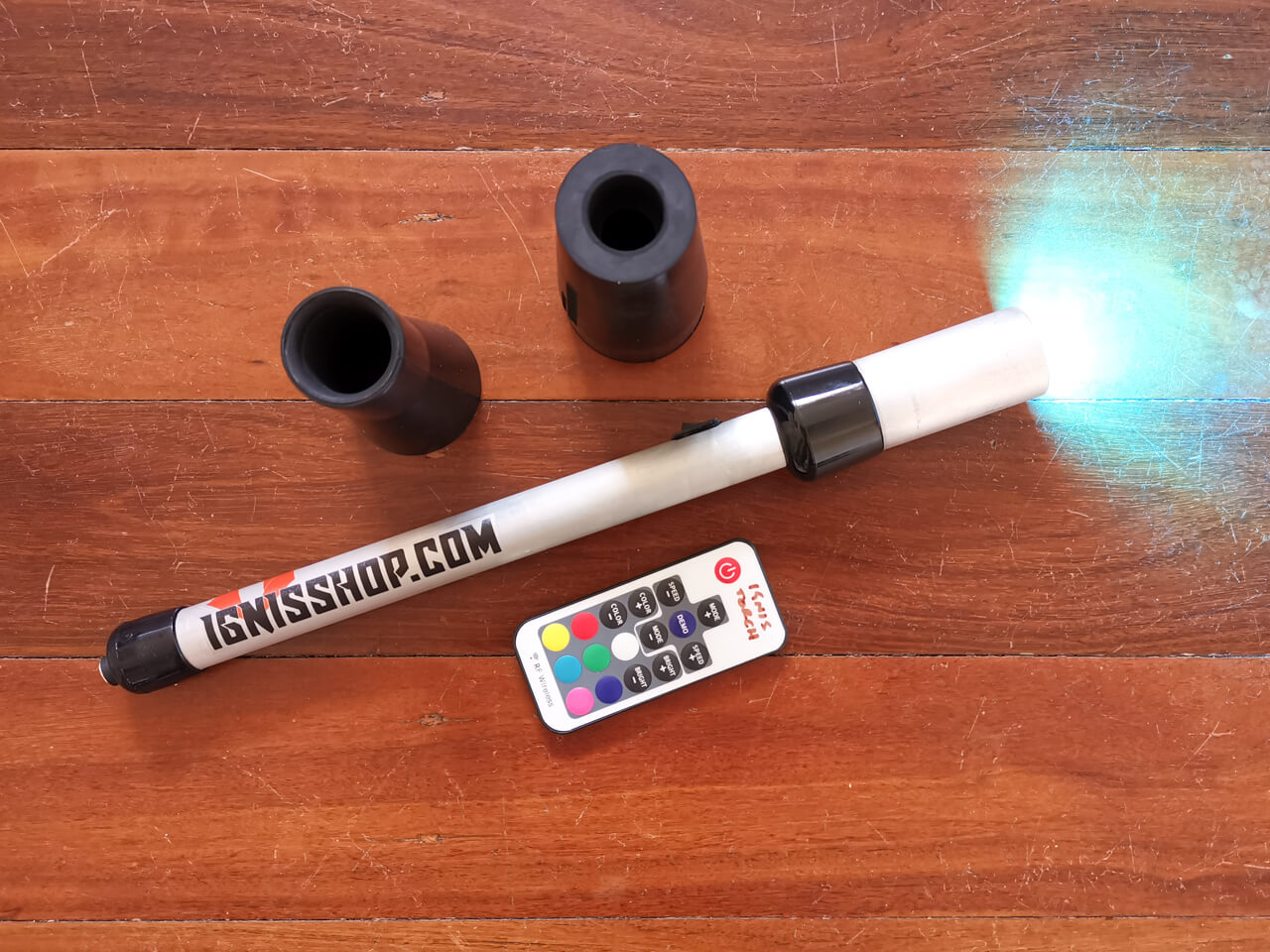 With the supplied RF remote control, there are 5 brightness levels, 20 static colours, 22 effects with up to 10 speed levels including multiple colour fades, pulsing (0.1-2.3Hz), and strobes (0.3-6Hz with approx. 20% on time). The only switch onboard the light is an on-off switch. Whilst there is no momentary switch, the on-off switch is small enough and well placed to allow a high degree of control when light drawing. Due to only having a single stage switch, the effects modes, colours, or brightnesses controlled by the RF remote control cannot be changed whilst the switch is off, so you have to step outside of the camera’s view when changing modes (other than adjacent modes) mid-light painting scene. On the good side, at least it means that light trails have a constant effect pattern each time the switch is turned on.

The Color LED Torch has an internal 12V li-ion battery pack, which charges quite quickly in an hour using the supplied power cord. A light on the power supply changes colour when the light is charged. Personally I prefer removable batteries, so that I can check the battery voltages and capacity with an analysing charger. However, many consumers prefer lights with internal charging, so will like this option.

It should be noted that all RGB colour mixing lights have either no stated, or exaggerated lumens ratings for commercial reasons. The measured lumen output with RGB all on full power was 150 lumens, which makes it the brightest RGB colour mixing flashlight that I’ve tested so far in terms of lumens. Whilst it is has 50% more lumens than the recently tested Light Excursion Deluxe RGB, I found that due to the Color LED Torch having a floodier beam profile (due to having no lens/optics), both lights have the same “useable” brightness when connected to light painting tools. An example is f/8, ISO200 when connected to a Light Painting Paradise Plexi Rod. It needs to be noted that the maximum output dimmed quite rapidly during light painting sessions, and thus this light will need to be recharged before the start of each light painting session for optimal output. 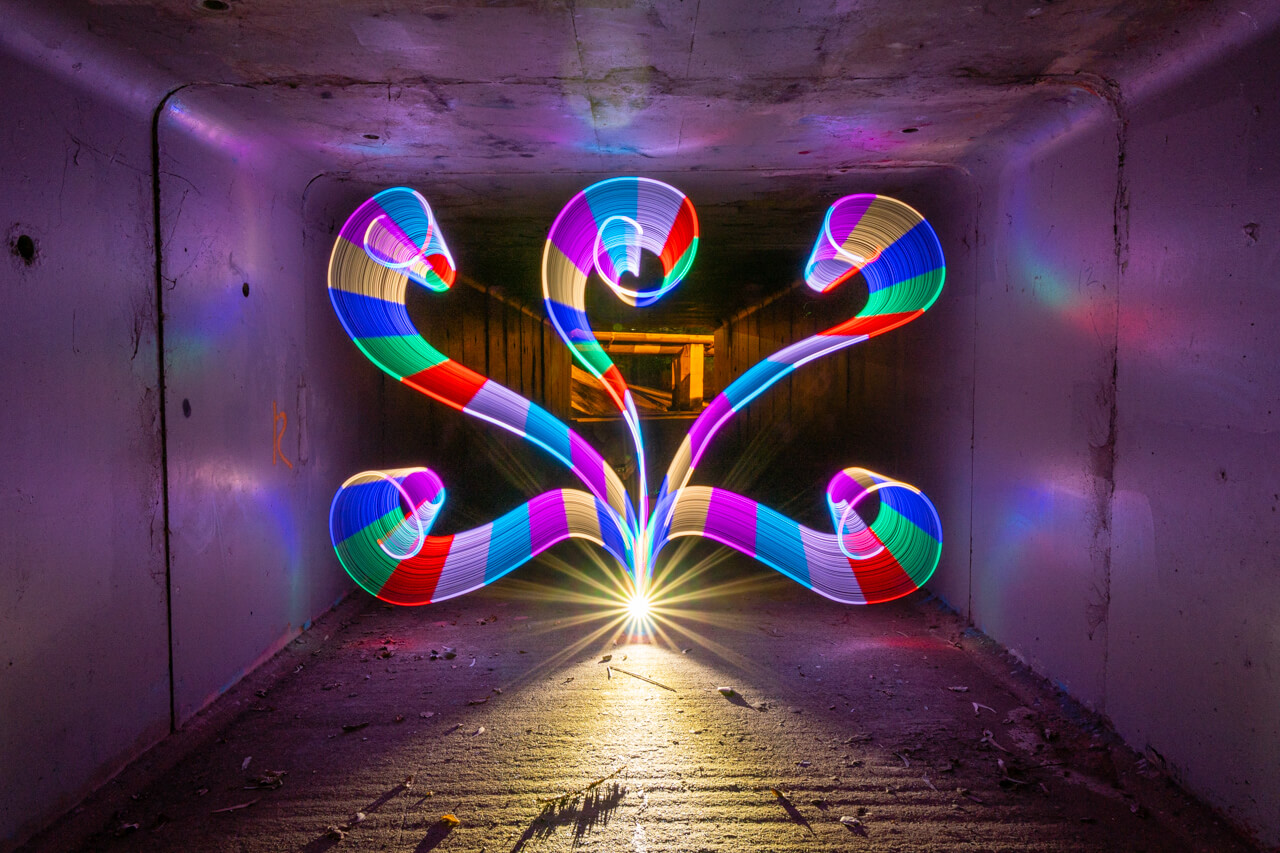 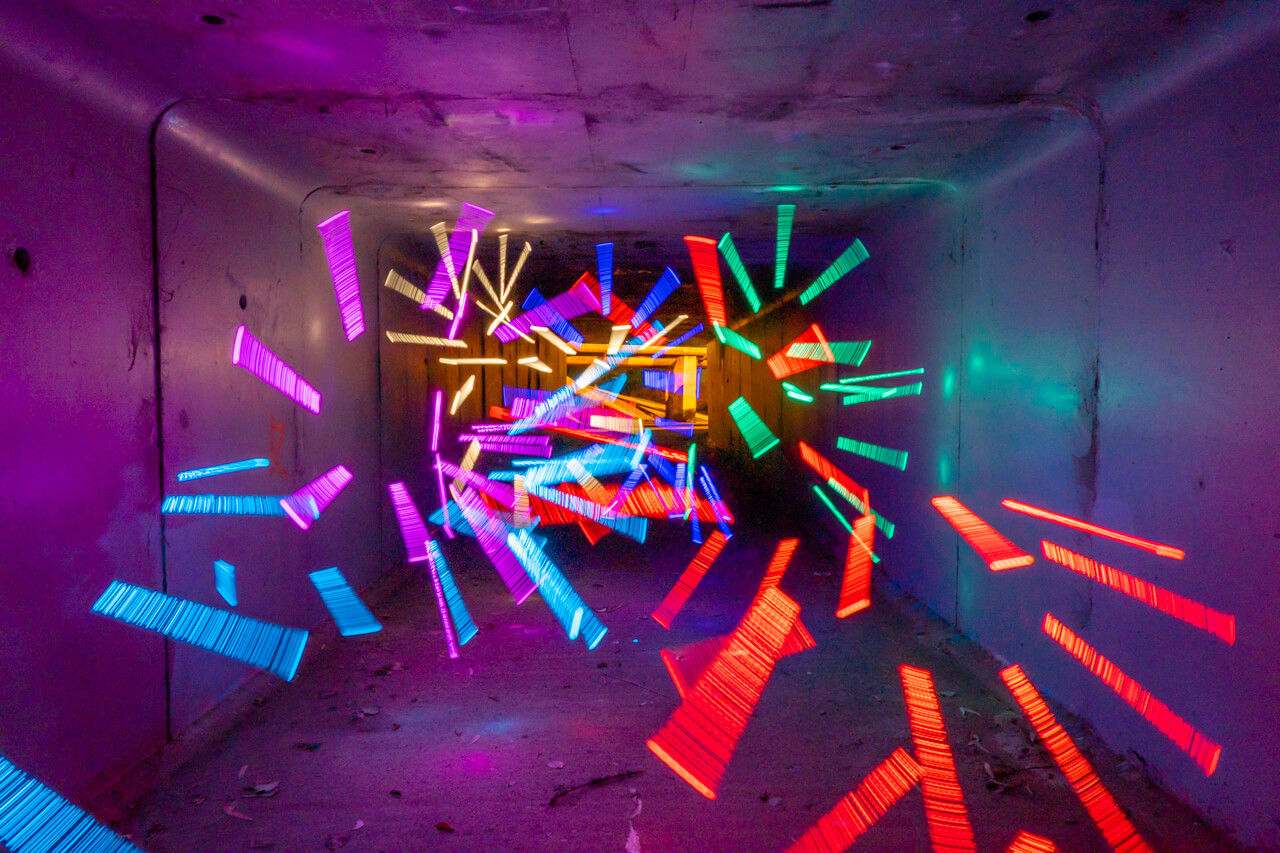 The light has an interesting LED unit, which has a 3×3 matrix made up of 3 Red, 3 Green, and 3 Blue LEDs. Despite having no optics, the colour mixing is the best I’ve seen on a RGB colour mixing light for light painting. The wide hot spot is well mixed, as is the spill beam. The Pulse Width Modulation (PWM) is evident, but only noticeable if the light trail is within a couple of metres from the camera or very fast moving. Due to the 10W LED driver, the light does heat up quickly and it is advisable to not leave it running on maximum output for more than a few minutes. Also, as the power supply connection and LED is exposed (though there appears to be some form of protective film covering the LED), I would not advise using this light in wet conditions.

The Color LED Torch is a competent colour mixing light for light painting. I liked the range of colours and effects modes, consumers will like the internal charging, and the usable brightness is equal best in class. Improvements would be the ability to change effects modes whilst the light is off, heat sinking, and optics to narrow the beam profile.

The Color LED Torch can be purchased from Ignis Shop at:

The Lightsaber from Ignis Shop is an LED wand that comes in a variety of lengths. This review is of the 9 LED /15cm strip version. Other versions are 18 LED / 30cm and 30 LED / 50cm. The LEDs are only on one side of the light, and have an approximately 160 degree viewing angle. 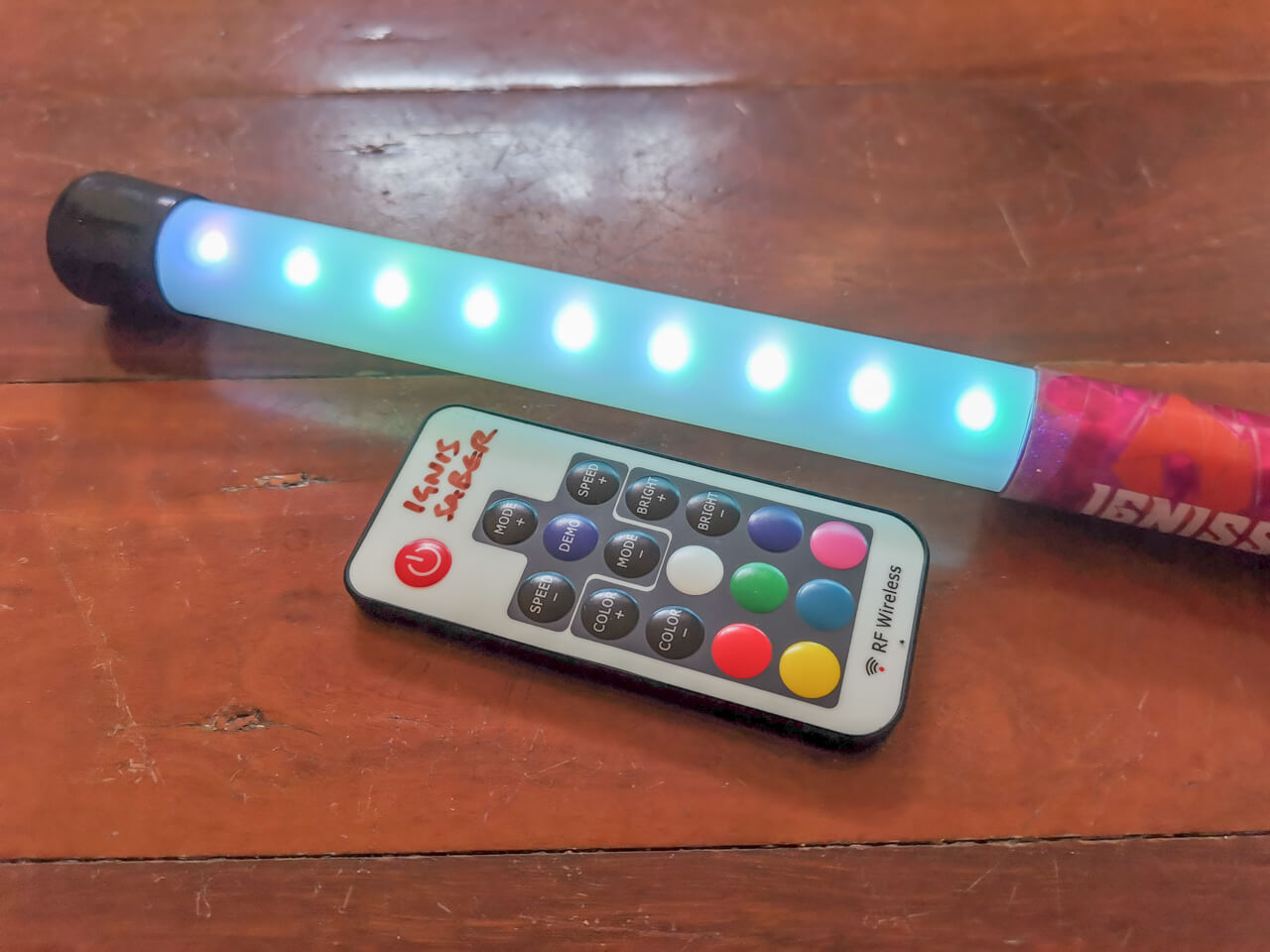 The Lightsaber uses the same RF remote control as the Color LED Torch, and thus has an identical and impressive range of colour, brightness, and effects modes. Again, there is a single on/off switch for control, but is still easy enough to control reliably for light drawing. As with the Color LED Torch, it is not possible to change effects modes, brightness, or colours, whilst the light is off, so you have to step outside of the camera’s view to change effects modes, and then back into the view. However, effect modes are consistent each time the switch is turned on.

The Lightsaber is USB rechargeable, having an internal battery, and a micro USB charging port at the end device. Charging was achieved in around an hour, and I didn’t not experience any noticeable dimming during a lengthy light painting session. 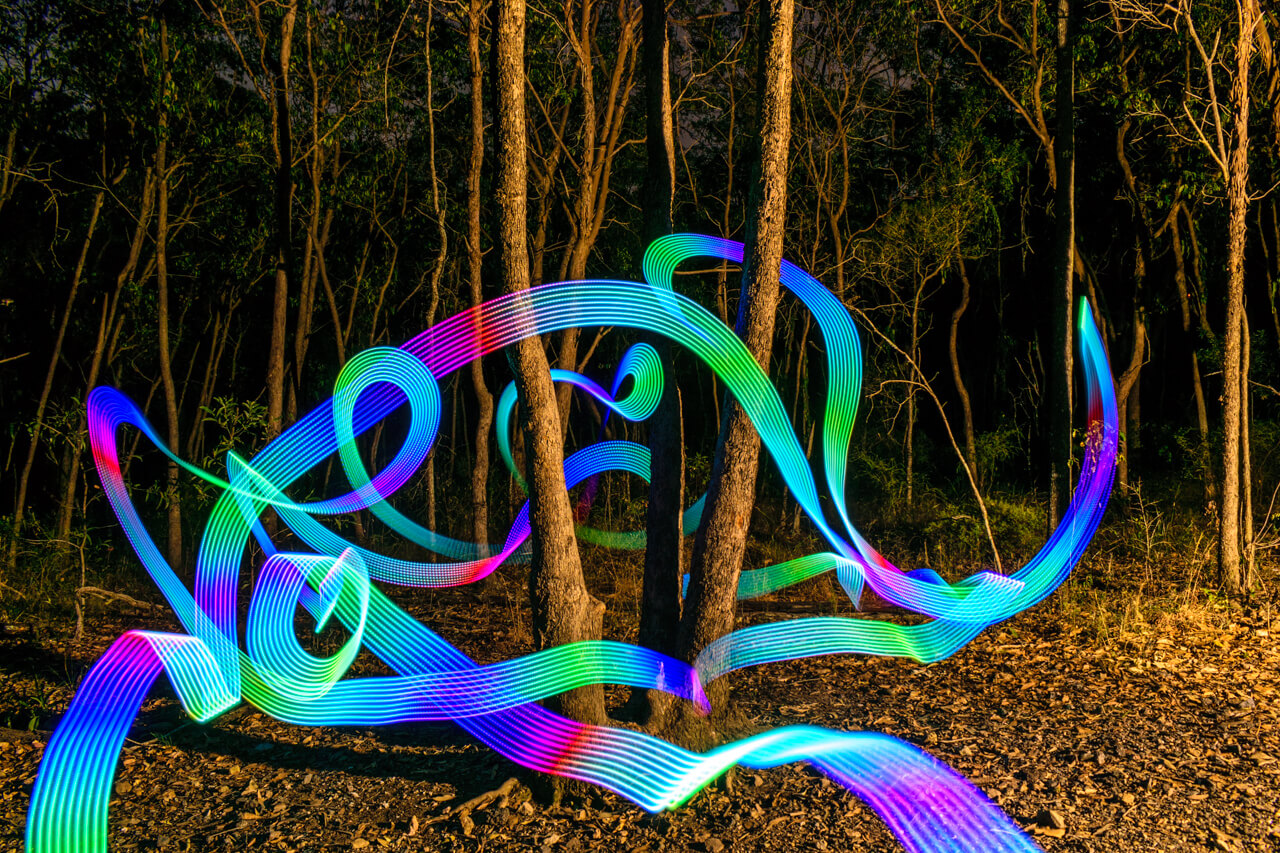 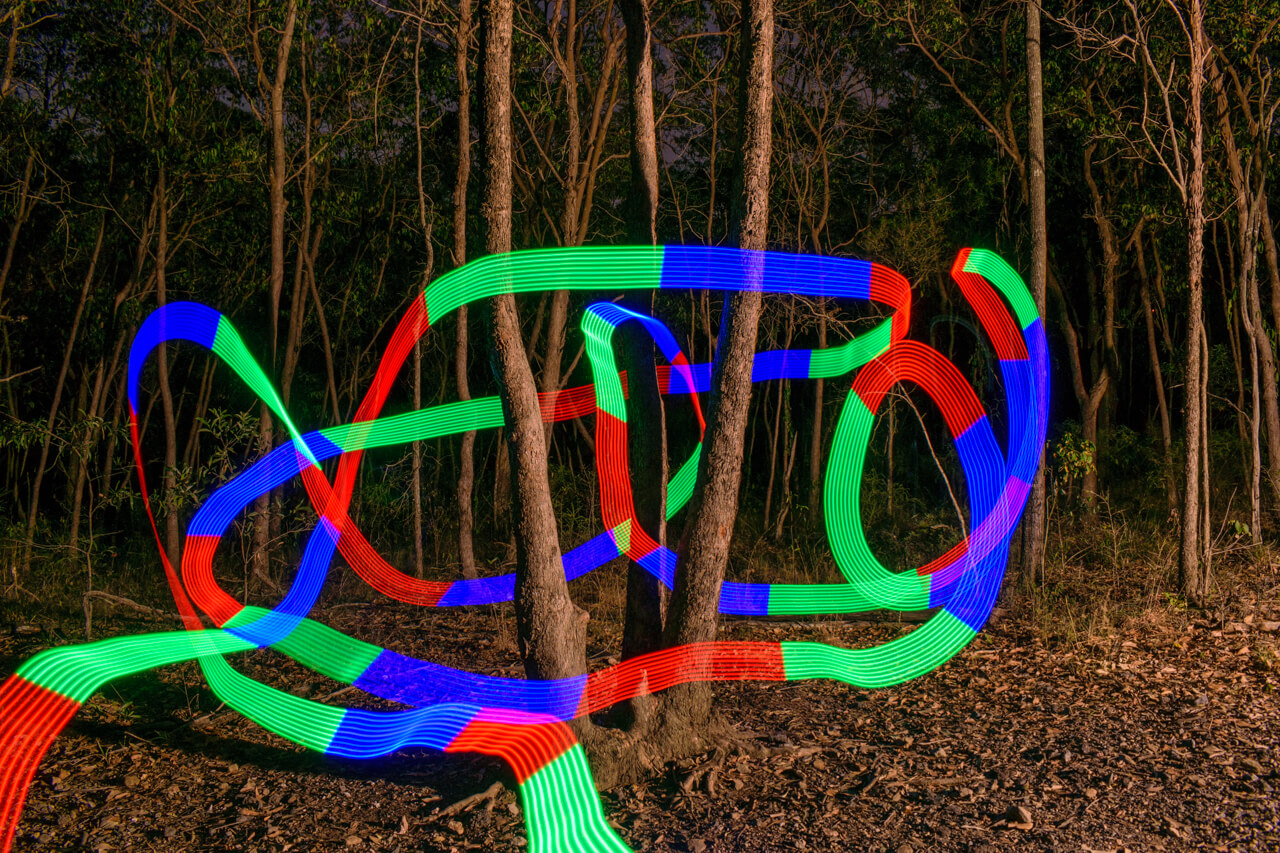 At maximum brightness, a typical camera exposure was around f/10, ISO100. So this is a useful tool in situations where the ambient brightness is quite high. PWM can be quite noticeable, even when the light trails are 5 metres away from the camera.

It is fairly easy to make a homemade LED light wand, however for those who don’t like making their own tools, the Lightsaber is a fun tool to create bright colour changing light trails.

The Lightsaber can be purchased from Ignis Shop at: 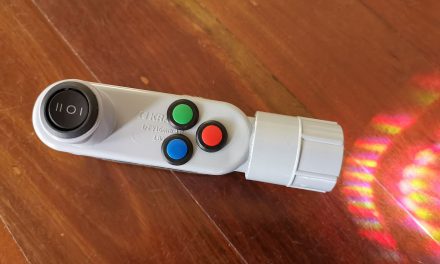 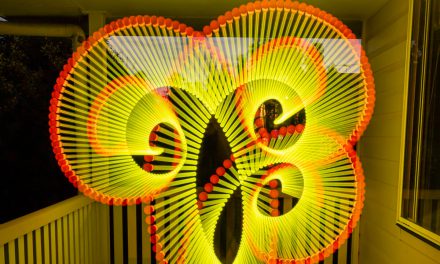 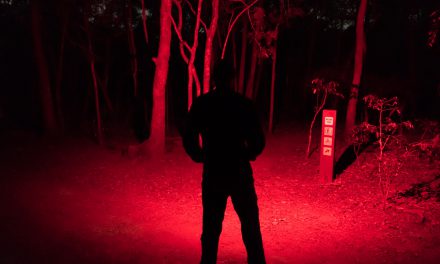 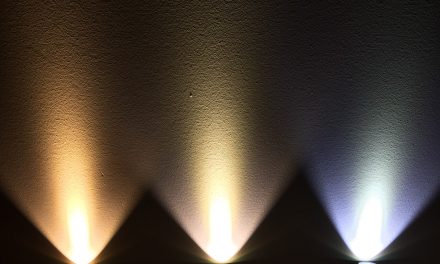